The Time Has Come Today

A picture is worth a thousand words, innit?

What, No Lucky Charms?

This time I'm entertaining you all from work, where I've taken my laptop...and after a few hours, I've even managed to get it online and working! Anyway I wish I had a picture to show you guys. An hour ago, it finished raining, and outside we had a rainbow whose end was, miraculously, right outside of our building, in the parking lot to the adjacent hotel. Sorry to say, I looked outside, right where the rays of multicolored light hit the pavement, and no pot o' gold could be located. (Still would've been cool to photograph the end of the rainbow...grr...)

Let's see what else is up...if I weren't writing to you people right now, I'd be writing my novel in between calls. It's okay stuff right now, nothing special. It's an arduous task, introducing my main character to the audience, having him go through his daily routine the morning after Spring Break has officially ended. I'm sure it'll pick up, but it's just not very interesting yet, no doubt because the real fun hasn't begun (and won't for another chapter, at least). Still it's nice to just write, to express myself, to once more assume the guise of the tortured artiste. Plus, well, I do have my newfound muse to think of, which is nice. Maybe I'll get the last of my research in very soon (some emails involved with not-so-young professionals...nothing so outre as the previous bout of "research," I assure you).

Anything else? Well, the Power Girl sketch from my buddy Jon Falkner is coming in at last, and I may scan it to give you guys a peek. If anyone's interested in getting great penciled art, then drop me a line and I'll put you in touch.

If you guys remember my last blog post, you'll know I predicted the apocalypse coming sooner than expected. Well, according to MSNBC, the global "tipping point" has been or may soon be reached, meaning environmentally, we're all just about screwed unless we cut down on emissions by about 50% in the next few years. Fun. Between this and Bush being in charge, we are indeed past the point of no return on this sinking ship we call Earth. Don't deny it!

At least maybe I'll become a bestselling author before we all die in the 6th Extinction...

Iron & Steel in Your DVD Player (Or, The Most Unexpected DVD Season Set of All...or, "DRIVE!") 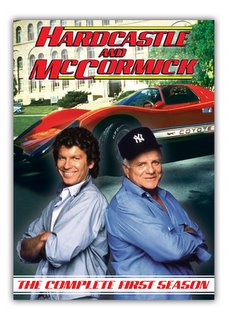 Oy vey. Is it me, or is the apocalypse now coming that much sooner?

This just in from the wonderful folks at tvshowsondvd.com: one of my favorite TV shows from the early 1980s, Hardcastle & McCormick, is coming back in a five-disc DVD set, due in Canadian stores February 14th. Anyone who doesn't remember this show--well, you're excused, but you'd better get yourself to an online retailer the moment this thing's up for preorders, else you'll be missing the big one. And here I just got over having The Flash in a 6-disc set, arriving a scant few weeks ago. At this point I really won't be surprised if Paramount heeds the demands of the assembled masses and schedules Friday the 13th, the Series: The Complete First Season any day now. (God would then have to announce the apocalypse as occuring the following Tuesday, methinks. Damn.)

So, what is H&M? It's a buddy cop type deal, only, well, not. Evidence: "Milton C. Hardcastle is a retired judge from the Los Angeles Superior Court. Mark McCormick, an ex-race car driver turned thief, was Hardcastle's last case. Mark has been placed in the Judge's custody and together they're going after 200 cases that walked out of Hardcastle's courtroom on technicalities." Okay, so the show didn't quite make it to 200 episodes, but the three seasons that were produced were pretty good. Keep in mind, I haven't seen the majority of the episodes for years, but the pilot was very entertaining and several other episodes I have seen in the last few years (thank you, traders!) are almost as good. I can't wait to see the pilot in high quality as it was meant to be seen.

So, check this set out on Valentine's Day. And buy The Flash on DVD while you're at it.

Yes, while I was at work today, staring out the window, I saw darkness...and snow...and then I saw a flash of lightning followed by a big ol' boom. The weirdest f*cking weather phenomenon since God invented weather came to Pittsburgh this evening. Yeah. Keep in mind, I knew about thundersnow before--in fact I used it as weather of choice in my Marvel Comics spec script, Son of Satan, but I never actually saw it before today. Color me stunned.

Maybe the Steelers can win one for the thumb this year after all. Y'know, it's gotta happen at least once in my lifetime (that I remember, dammit--the last Super Bowl victory for the black 'n' gold happened when I was just shy of one year old)...just like the frickin' thundersnow.

Of Novels, Muses, Employment, and, Y'Know, Other Stuff

Whew....didn't think I'd ever get back to you guys.

Let's see: the new job doesn't suck. In fact, not only does it not suck, I now have my own name plaque velcroed to the cubicle, which means my job's secure for at least another week. I've been working hard, but now things are settling down enough that I can probably work on some other projects.

And yes, that means...the novel. I took a trip for research purposes to a local (ahem) club in search of stories and fulfillment of that whole "write what you know" shtick. Well, coming out of it last night, and after having to drag my buddy kicking and screaming from said place, well, I only wish the trip were tax-deductible. Not that I'm hurting for cash now, mind you...and if, if I go again, it won't be for a good, long while. Anyway, I think I've discovered my artist's muse. And no, no, a thousand times no, it's not a sexual thing. And I'm not protesting too much, but rather, just enough, thankyew. I'm trying really hard to get some extra sleep so I can maybe write some tomorrow early when I'm refreshed.

I'm also reading a bit more. Check out Greg Pak's debut on The Incredible Hulk with February's issue #92, and Stuart Moore's truly revolutionary treatment of my favorite DC hero in this past week's Firestorm, which had not long ago been relegated to the bottom of my reading pile. Welcome back, Martin Stein!

More tomorrow or the day after, honest!