Just When I Thought I Was Out... (DCU Rebirth SPOILERS!)

Remember when I said that both DC and Marvel Comics had catastrophically screwed the pooch when it came to handling their greatest super-heroes and super-villains?  (The most recent spate of comments started here with a discussion of Secret Wars and Convergence and continued over here with some talk about Superman: Lois & Clark.)

Yeah, Marvel's still doing it. I think right now I'm about the most opposite-of-excited as I've been for Marvel in a long, long while. Maybe ever! And it's something that's well reflected in my current buying habits. In my Discount Comic Book Service order for the month of May, I've only ordered nine ongoing Marvel titles--and five of those are in the Spider-Man family of books! I'm only reading what I enjoy, but even the current crop is subject to elimination. (And no, Steve Rogers: Captain America isn't doing the company any favors in my eyes, although certainly I'd be more apt to judge after we see more than just the first chapter.)

But DC? This last week returned a skosh of the goodwill they squandered over the last year. And the next several weeks will either validate that early feeling or maybe just sour me the rest of the way. 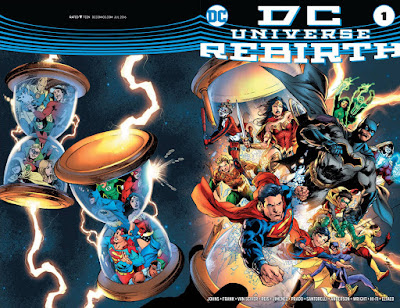 Of course, I'm talking about DC Universe Rebirth #1, the book that officially pulls back the curtain on the DCU of old and turns the trickle of old DCU carryovers into a veritable flood. Sure, a few characters like Batman and Green Lantern kept the majority of their continuity thanks to writers with long-term projects (Grant Morrison on the former, Rebirth scribe Geoff Johns on the latter). But it wasn't until Convergence with its undoing of Crisis On Infinite Earths that the ripple effect began in earnest.