CAUTION: This entry contains SPOILERS for Incredible Hulk #5. You have have been warned. 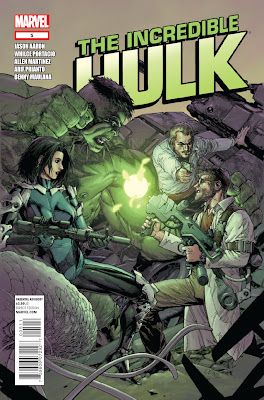 Over the last few months, since the first issue of the new Incredible Hulk series shipped, I've been less than enthusiastic. Some of it's had to do with the woeful lack of artistic consistency in the series. Even today, the interiors are supplied by no less than seven artists apparently just so that this series can ship on-time like DC Comics' "New 52" relaunch. Image Comics founders Marc Silvestri and Whilce Portacio have brought their talents to the series. At least Silvestri helped make the book's relaunch more high-profile than it had any right to be, but he only remained three issues (or less). Portacio took over with the fourth issue, and even contributed to a few pages of the second, but he too has been caught in an artistic rut without room to maneuver. The covers, meanwhile, have been the most visually stunning part of each issue, with the interiors inevitably failing to live up to their promise. This fact is especially, painfully true with the introduction of Leinil Yu, whose art would look, dare I say, incredible on the interiors. Okay, okay--it's not all sunshine and rainbows for Yu, who seems to be actively ignoring the look of the Hulk inside the book, choosing instead to portray him with a high bowl cut instead of the long hair and beard he wears within each story.

And the stories, concerning Banner's separation from the Hulk, well...

Leave it to Marvel to complete their own metaphor: 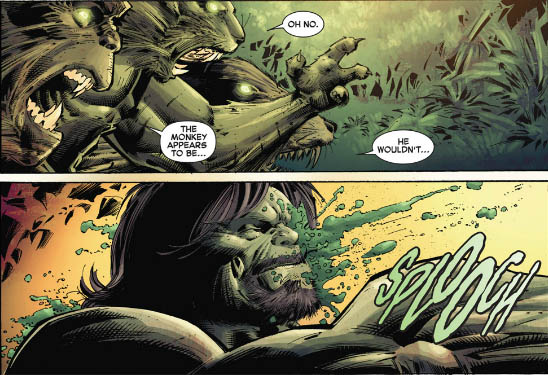 I would say that "getting hit in the face with radioactive monkey crap" is this year's "jumping the shark," but the fact remains that Marvel's Incredible Hulk went downhill somewhere in the planning stages when they decided one of the Future Foundation's series regulars would be behind the titular character's separation from Bruce Banner during the summer crossover Fear Itself. The revelation of his identity and the method through which he separated the duo is supposed to cast further events in a new light, and to a point that happens. However, it also points out a number of flaws in the original story as it was devised, and hints very strongly at the resolution.

Yes, I've been wrong before. Still, with all the signs we've gotten recently, the first of which was Banner's huge brain tumor in issue #2, the possibility is out there.

In issue #3, we saw the Hulk and Banner shortly after their separation, in front of their mysterious benefactor, with the latter wondering what the Hulk would do now that he had his freedom. And back in Fear Itself #7 we saw what immediately followed the separation, with Banner waking up attached to an I.V. in the middle of nowhere and the Hulk leaping away as the scientist realized, with horror, what had been done to him.

Of course, since then Banner has gone seriously off his rocker. Was it the trauma of separation itself that had triggered his psychosis? He found an island once used for atomic testing, where he could act like Dr. Moreau, endowing the various animals with human-like intelligence and "hulked-out" forms using gamma radiation. He's mutated warthogs, gorillas, octopi, bats, rodents, and even little monkeys that can't escape the propensity to fling poo...

Ahem. Where was I?

With Doctor Doom revealed as the architect of this latest separation--something that, truthfully, we should have seen coming the moment someone with the last name of "Von Doom" showed up in the series--we not only have someone who is among Marvel's smartest known characters, we also have someone with an ax to grind against Bruce Banner, if not his atavistic alter-ego. After all, it was during "Fall of the Hulks" that a depowered Bruce Banner allowed the Leader and MODOK to use a "dumb ray" to blunt Doom's intelligence. And then, when the remainder of the smartest men regained their intellect in "World War Hulks," Banner tricked Doom into thinking he'd also regained his intelligence (but he hadn't). It took intervention by the Future Foundation, the expanded version of the Fantastic Four, for Doom to regain what he'd lost by copying it from the brain of Kristoff Vernard, a young man imprinted with Doom's unique engrams.

Of course Doom remembers what Banner did to him. I don't mind that part. It provides a reason for Doom to have incorrectly "wired" the new Banner clone he grew. Certainly that's writer Jason Aaron's intent. It's another imperfect separation, contrary to the Hulk's own wishes. After all, Doom claimed that if he were to totally separate everything Banner from the Hulk, the monster would "be a bit more eloquent than 'Hulk smash,' but still, in essence [...] be the strongest 7th grader in the world." Since he seems to have more intelligence than that, Doom didn't do what was asked of him. The Hulk knows this too, for it was his own memories we saw in the flashback that detailed the separation this issue. 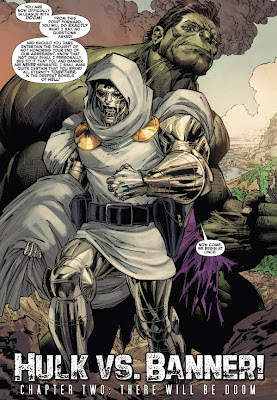 What doesn't bother me so much is that the Hulk willed Banner down into darkness to do the deed. It's not like he hasn't done similar things before. He did repress Banner's memories of injuring Betty because he held her while he changed (Incredible Hulk #334). And since Greg Pak returned the Hulk from Sakaar, nobody's precisely been sure what causes the metamorphoses anymore, so we could guess that each can do what they need to.

What does bother me is that Doom would have to be some umpteenth-order genius to recognize, on sight, the pieces of the brain that make up Banner and those that make up the Hulk. What bothers me is the implication that there was no overlap whatsoever between those pieces. (Then again, maybe Doom used part of the brain from the Banner he cloned, grafting on the other pieces he scooped from the Hulk. And that leads us through a discussion of just how the Hulk's brain differs from Banner's after the metamorphosis. Shall we skip that part?)

And what really chaps my hide is the apparent idea that the Hulk's incredible healing factor couldn't just regenerate the missing pieces of brain tissue, in which case sooner or later ol' Hulky will end up right where he began.  In fact, it's amazing that Doom was able to complete the surgical procedure at all, knowing what we do about the Hulk's very unique physiology.

Oh, did I just give away the ending to Aaron's story? 'Scuse me. Here, have some more of this:

Did Banner really "[work] for years on a way to separate" himself from the Hulk before admitting defeat? Only if you consider "separate" to be a euphemism for "cure himself." Banner has long held that the Hulk is all of his most destructive urges given form, so why would he merely wish to cleave that part of himself away? That part's wrong, too.

So what did Doom leave as part of Banner? A driving megalomania to reproduce that which has been denied him, resulting in an island of Hulkish things. Whether this is "really" Banner without the Hulk--if Banner has become unable to deal with emotions he heretofore sublimated into the monster, or if the trauma of the separation--that's all irrelevant. Obviously Aaron gave us Doom as the deus ex machina, the miraculous method through which the "real" Bruce Banner may be absolved of all his "sins" that this clone has carried out. And that includes...

I don't much agree with Aaron's ideas, ranging from yet another imperfect separation of man from monster using a clone whose existence I prophesied, to the Outcasts version 2.0, to using another set of heroes' arch-villain to facilitate the process. I can see the whole "Hulk accomplishes things with his fists; Banner does things with his mind" shtick on horrid display with this issue's confrontation between Banner and the M.A.D. Squad, as hackneyed a "secret organization" as ever existed. (Dig all of the blatant exposition masquerading as Banner's dialogue, kids!) I can also see that, well, we're being set up for the big conclusion of "Hulk Vs. Banner" and its inevitable aftermath. 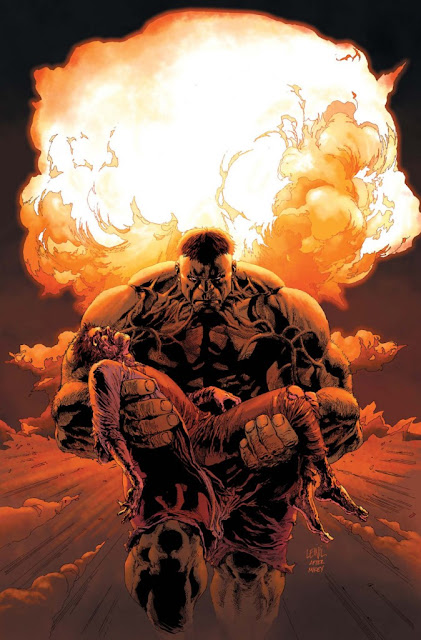 Of course, we'll be made to believe it's a permanent thing. The Hulk will lament the loss of his other half, however briefly, and the fans who never liked Bruce Banner in the first place will rejoice that the character's finally got his much-deserved freedom, never again having to transform into that weak, pink-skinned shell of a human being they only had to tolerate until he became angry.

Then, the Hulk's brain will heal. And Banner will return. And he won't actually be the same Banner as who raged against the Hulk in these first several issues, so we won't hate him anymore. It was "the clone" who did it, after all. Not the "real" Banner. Rah, rah. And what will we have when it's through? Another "what if" adventure that Banner remembers nothing about.

And yeah, a "what if" story in which the Hulk got hit in the face with radioactive monkey crap.