No Delusions: Atomic Comics Has Closed 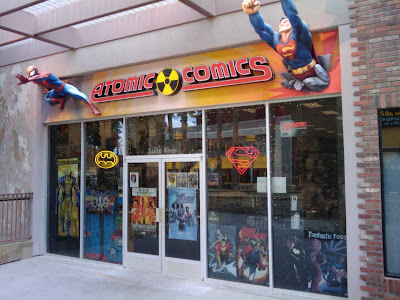 The rumors are true. As of last night, August 21, Atomic Comics, the largest comics chain retailer in the southwestern United States, is no more. Owner Mike Malve verified the chain's closing in a statement issued early this morning, citing the current financial climate as primary reason for his stores' collapse.

This wasn't the first sign of trouble for Malve and his stores. A car crashed into the Mesa Superstore location in late 2006, causing incredible damage including a water main break that damaged over a million dollars in inventory. The store closed for five months, after which much of the clientele never returned. Add the current economic downturn to the precipitating event, and it isn't hard to see it was all a perfect storm that led to Atomic's collapse.


Even before moving to Phoenix, I'd always stop by one of Atomic's locations when vacationing here. I still have many a back issue with an Atomic Comics price sticker on the bag, or a backing board with the mighty words "BUY ATOMIC OR DIE" stamped in red. The store's employees, like managers Julian Moraga and Nick Hartrick, and others like Tobias Robbins, always were a great source of information and made me feel at home. Others have described Atomic as the "Cheers" of comic book stores, and I suppose that's pretty accurate. And none was more pleasant or easygoing than Mike Malve.

Since moving here, I truly enjoyed talking with Mike. He knew the big boys at Marvel, DC and Image, and regularly compiled an "industry insider" newsletter telling how books were selling at his stores. Some of the highlights of being here in Phoenix included the talent he was able to attract for events. Geoff Johns and Sterling Gates came to town for Free Comic Book Day 2009 (a year after I missed out on the Image Comics founders reunion). Jason Aaron signed the first volume of Scalped for me last year while we talked about Daimon Hellstrom and Spider-Man and His Amazing Friends (yes, he's a fan--what of it?). Most worthwhile were the writing seminars held on late nights at the Mesa store, where I was able to discuss writing techniques, both in a group and one-on-one, with the likes of Jonathan Hickman and Brian Michael Bendis.

Yet, for all the elbow-rubbing with the bigwigs, Mike was able to relate to his customers, and I enjoyed speaking with him when I'd see him in one of the shops or at a convention. I know he was worried about the ramifications of the DC "New 52"--he and I agreed that DC's efforts would be better served relaunching the entire line over several months and not in one big push--but overall he was optimistic for the industry. He said that retailers should consider taking out loans so they could order as many #1s as they could because he felt the industry and the fans were good for it. That's confidence in the product.

Behind the scenes, obviously, trouble was brewing, for all the reasons I've cited above. Now, the signs seem painfully apparent. Most telling appears to be the below ad, which advertised the extension of the July "$1 Sale" on back issues until August 21--coincidentally, or perhaps not so coincidentally, Atomic's last day in business. Scary, huh? 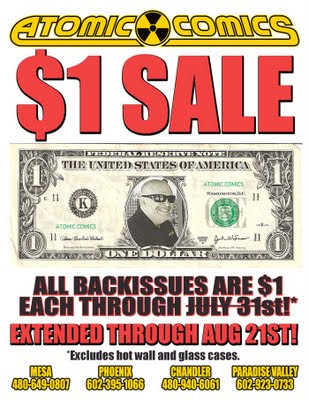 Certainly, Mike's superhero status in the comics community, not just in Arizona but across the country, means Atomic's closure leaves a tremendous hole in the heart of the industry. It is not, however, a signal of "the end times" the like of which I prognosticated in earlier columns. This was not (solely) about DC's "New 52," which is too easy a target (although reports suggest the owner was finding it difficult to pay for all of DC's September releases as the Final Order Cutoff date loomed). Digital distribution may have been threatening, true. And once a business finds its cash flow severely curtailed, it's difficult to find ways to build the base back up.

But I know Mike was trying. Just last year, his store had a huge presence in the film adaptation of Mark Millar and John Romita Jr.'s creator-owned comic Kick-Ass, and there was an Atomic Comics casino in this year's X-Men: First Class. Still it appears the advertising didn't pay off when it mattered.

Now, Mike Malve has filed for bankruptcy, a difficult but necessary decision. I understand he's lost all inventory in all the stores as well as his family's house, which was secured against the properties' leases. I can only hope he lands on his feet and once again finds a way to substantially contribute to the ongoing growth of the medium he loves so much.

Similarly, I hope Phoenix comic fans don't submit to the same kind of despair that occurred in the wake of Atomic's 2006 temporary closure. I hope they realize there are other comic shops in the area that practice excellent customer service and offer all the books they used to have on their pull lists at Mike's stores. Two stores I can personally vouch for include Mike Banks' terrific Samurai Comics (for whose website I wrote the original version of my "Who Is Red Hulk?" article) and Alan & Marsha Giroux's incredible All About Books & Comics (which has the largest inventory of back issues in town). They deserve your business in the wake of the bad news coming from Atomic Comics yesterday.

So if you're in the Phoenix metro area and are thinking of giving up the hobby, or ordering from some online retailer that offers bigger discounts, think twice. Support your local retailers, otherwise, if a chain of four stores can disappear...!

God bless, Mike. You're one of the good ones. You'll find your way back.