(EDITED 7/8 thanks to Cth at The Incredible Hulk Message Board!)

It's been about a year since my last post on Marvel's Green Goliath. Those of you who have followed me for any considerable time know the Hulk is my favorite comics character. Hence, I'm a bit territorial when it comes to big events surrounding Big Green. And when I'm displeased, I'm known to write pieces like those dissecting the runs of Jason Aaron and Mark Waid.

Up to now, I've been staying eerily quiet about Totally Awesome Hulk. That ends today. 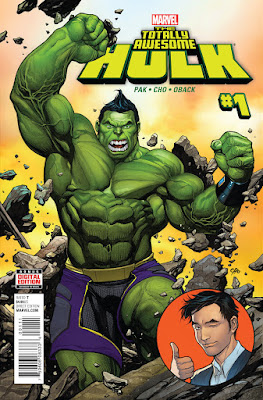 I've got much more to get into than Totally Awesome Hulk by itself, so I'll try to be brief. For Greg Pak--one of my very favorite Hulk writers, his name spoken in the same breath as Len Wein, Bill Mantlo & Peter David--to have a comeback would ordinarily be a cause for celebration. At the same time, there was apprehension, for what writer successfully returns to the book on which he made his mark? Even Peter David couldn't make lightning strike twice, leaving not even a year into his second tenure. It was true that this time, Pak was making his own creation, Amadeus Cho, into a brand new Hulk, in a move that I previously stated echoed Bill Mantlo's original plans before he handed the book to John Byrne. Some at the time called it a Gary Stu situation (look it up) beyond all others. Me, I went along for the ride, as Pak had earned much goodwill in his prior five-year run.

The verdict? The book isn't wretched-bad, but the tone is wildly different from anything related to the Hulk in previous years. In no small part that's due to the temperament of the protagonist, for one thing Cho definitely isn't is Banner. The flippant quality is actually marginally close to that of She-Hulk's second series, a fact to which Pak no doubt paid homage when he had Jennifer Walters' emerald alter-ego guest-star during the first storyline. (The cover gag on #4 recalls it very clearly.) It's clear Pak relishes exploring more of Cho's world, what with the introduction of his oft-mentioned, never-before-seen sister, Madame Curie "Maddy" Cho.

Unfortunately, much of the series feels like Pak is trying to stuff a gamma-enhanced square peg into a round hole, shoehorning in psychological trauma in order to give Cho an artificial threat of losing control to his own "monster within." I thought Pak and co-writer Fred Van Lente did an excellent job of bringing Cho's origin tale--in which his parents were killed by an evil madman named Pythagoras Dupree (I can't make this stuff up)--to a vital conclusion. That said, Marvel needed a reason for Cho to be a Hulk, so they just couldn't let the past rest. Cue the depressing "he's just happy-go-lucky because he's repressing all those awful memories of his parents dying" backstory. Don't get me wrong--there's still no one better to write Cho than Pak.

The best parts of the book so far have been those in which the original Hulk has appeared. In the first four issues, Pak flashed back to the origin of Cho's Hulk, wherein Banner's monster absorbed the radiation from a leak on Kiber Island, insodoing becoming a greater danger. When Tony Stark thought to exile him to the Negative Zone, Cho instead used his own devices to drain the radiation into himself, curing Banner while turning himself into a brand new monster. And after two months away, Banner has again returned with the first of the series' crossovers into Marvel's summer event, Civil War II, which figures to be especially important for the former Green Goliath.

Imagine my horror when I saw this two-page spread near the back of Civil War II #2: 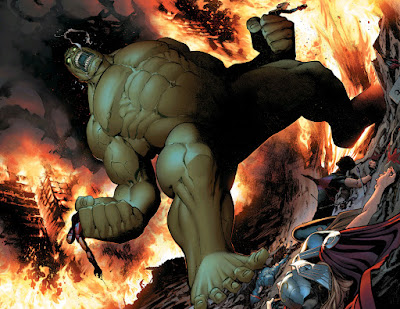 What have we here? A psychic vision of a naked, giant-sized, hacked-off Hulk with the bodies of Iron Man and Captain Marvel in either hand, standing above the corpses of more Avengers while a city burns behind him. In the context of the story, a new Inhuman with the power to see the future causes a rift between heroes who wish to use his power to stop catastrophic events before they happen. And in this vision, the Hulk kills everybody.

This, my friends, is the battle I have with people who just don't understand the Hulk.

Before you say, well, "Isn't that Amadeus Cho, not Banner?" I'll point out that Marvel editor-in-chief Axel Alonso is on-record saying that the Hulk in the image above is indeed Banner, not Cho.

The Hulk doesn't just go on random rampages, and he's not a murderer. Bruce Banner is a good and decent human being, and a part of him still exists inside while his body metamorphoses into the monster. It's that part that helps to guide his actions, to rein in the beast, to ensure he never really becomes the monster the world thinks he is. Greg Pak took this idea to a radical conclusion in The Incredible Hulk #110, where Cho postulated that Banner was inside the Hulk at all times, "running the numbers" so no innocents were harmed during his battles. (You may call it ridiculous; I call it comics.) It's only when Banner is incapacitated, like through the involvement of Nightmare, or taken totally out of the equation, as in physically separated from the Hulk, that he becomes a true monster with the propensity for wholesale slaughter.

Apparently, none of that matters to Marvel right now, because, well, Banner's back, and it's just in time to have all the heroes gang up and kill him so he can't Hulk out and kill all of them. (Well, actually, it'll be Hawkeye who does the actual deed; but, I digress.) 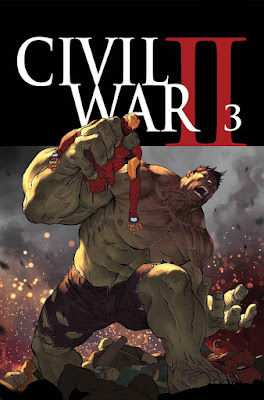 Civil War II #3, shipping July 13, will mark the end of an era. Don't believe me? Still questioning my foreknowledge? Let's spool out the hints, starting with an interview snippet with Greg Pak courtesy CBR:

I had a lot of fun writing these issues. It's great to be back writing Banner, and my editors encouraged me to go deep. I hope readers dig it.

You'll have to read the book to find out, but I'm working on issue #9 as we speak, and there's a big story to be told there. I seriously can't say any more for fear of spoilers. The story is important, and it's big. You definitely don't want to miss it.

Pak, encouraged to "go deep" in writing Banner? Maybe because it's one final look? And what's this about a huge spoiler surrounding Totally Awesome Hulk #9? Whatever could that be? Here's the solicitation copy:

AMADEUS CHO has lost someone very close to him. Now he's mad. VERY MAD. No one would like him when he's very mad.


Still reeling from a blindsiding loss, Amadeus Cho might be in over his head when the one and only Black Panther comes calling. 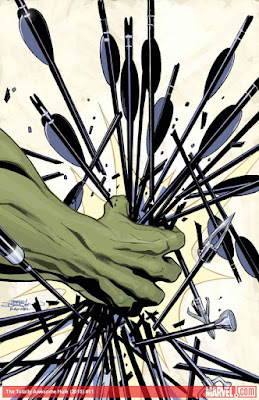 With the BLACK PANTHER watching his every step, the HULK takes on a mysterious new arch-enemy. But who is AMADEUS really after?

Those sure look like purple arrows to me, sort of like those shot from the quiver of a certain avenging bowman.

Going back a few more weeks, Civil War II writer Brian Michael Bendis stated the following regarding the Hulk's role in the crossover, in an interview with IGN:

When we asked about the Hulk’s role (...) the Marvel reps passed on the question. That’s the only question they refused to answer, so it seems something big will be happening with the Hulk(s).

Later, Bendis said that “something very unique” will happen to the Hulk in that issue. "I'm probably going to have to unplug my computer for a few days. Something big happens in each issue, but this will probably be the most debated," he said.

But what exactly will happen to the Hulk? The oldest piece of evidence is actually the ultimate example, coming in January from the New York Daily News as one of the first pieces on the crossover (emphasis mine) wherein Bendis spills the rest of the beans:


As the story unfolds this new seer predicts the hero in question will be the cause of a major incident of destruction in three days, requiring the other good guys to make a tough call. The writer just hasn’t figured what or how bad that cataclysm will be.

“It has to fall somewhere between Hitler and self-defense,” Bendis says.

“What if the pressure causes (the hero) to commit suicide,” suggests James Robinson, another Marvel writer, adding that it could be a good way to draw attention to the scourge of cyber-bullying.

After hours of occasionally heated debate, Bendis and Alonso reveal they had a eureka moment during a 10-minute break and came up with the perfect superhero to sacrifice and an even better candidate to murder him. The answer actually gets a loud ovation from the crowd.

I don't think there's any question that the Hulk is "the hero in question." Nor do I think there's any character more apt to attempt suicide for his own actions than Banner. And then, we turn to Bendis--who wrote the New Avengers: Illuminati special from 2006 that spelled out that the Hulk was responsible for countless recent murders as reason for the heroes to exile him offworld--and Alonso--the editor of one of the worst Hulk runs in the character's history--coming up with a solution to their problem. I don't know about you, but I'm seeing two creators who don't seem to understand the Hulk's base appeal coming together for an execution.

Shortly after Civil War II #3, Marvel is releasing a tag-team of one-shots, The Fallen and The Accused, with both their creative teams unknown save for the variant cover artists. There are three for The Fallen: Leinil Yu, Mike Del Mundo, and...Jack Kirby? Yu drew some of Indestructible Hulk; Mike Del Mundo is the current Totally Awesome Hulk artist; and Jack Kirby is the Hulk's creator.
Anyone want to bet that The Fallen--sure to have a different title revealed shortly after Civil War II #3 drops--will be written by one Greg Pak, and perhaps drawn by Alan Davis, and feature a memorial to the newly-deceased Bruce Banner?

Hulkinued later this week...because you're not gonna like me when I spell out what's wrong at Marvel!